Posted: November 22, 2020 Under: A Little White Blog By Mark No Comments

What a year 2020 has been – and just like the rest of it for us and our furry family – Autumn seems to have come and gone in a blur. A consistent high has been the presence of Chewy and Willow. Life has never been dull with them and just when you think they can’t surprise you any more they pull something else out of the doggy bag. 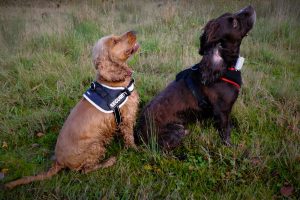 In the house we’ve seen Chewy learn what stairs and the sofa are. His sister has taught him that snuggling his hoomans is pretty special and he now sleeps upstairs on is own blanket next to the bed. Speaking of his sister the two of them are completely inseparable and have learnt that much more mischief is possible with two of you. Especially when your brother can reach things you can’t. Despite it being the driest summer we can in recall years Chewy’s water training at the paws of his coach has also kept going apace. 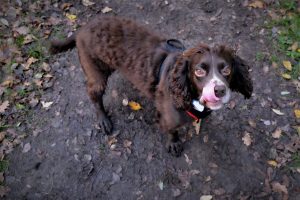 Sadly, their favourite swimming spot has stayed dry despite the on off deluges we’ve had this last month. They have managed to find themselves several new ones thanks to their amazing sense of smell and spanielling antics. When Chewy first arrived he would stay close to us – being completely unsure of exactly what the outside world meant. Since Willow’s arrival he’s gone from watching his sister charging into the undergrowth in a cloud of mud and leaves with a puzzled expression to eagerly participating. Indeed of the two of them, Chewy is now the one more likely to get carried away by the overwhelming plethora of amazing smells out there. He has learnt to spaniel and compared to the skinny, unfit dog we met back in January he is lean, muscled and fit! The more observant readers out there may have noticed the presence of small white box on “Long Boi” as he is affectionately known. 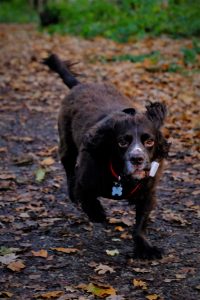 world he had a tendency to get lost, not surprising when you consider his start in life. He’s not too good with his sense of direction and is only gradually realising that he can find his way back to mum and dad by following his own scent trail. On a few occasions he’d get himself into a sit-chew-ation where he couldn’t find his way back. Everytime we worked out where he’d got himself we found a panicking sprocker relieved to see his dog parents. After a bit of research we invested in a spaniel proof GPS dog tracker (which we’ll cover in more detail soon). This means we can always find him if he gets too lost although he is getting better and better at understanding his whereabouts. 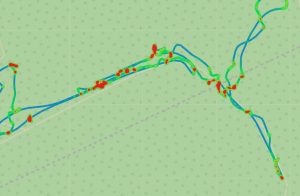 One thing his tracker shows us is just how much extra mileage the pups cover compared to their hoomans on their travels! We’ve really loved being able to see and hear them at this time of year. Its amazing how much sound the thick foliage of summer deadens. From furtive snuffles to the 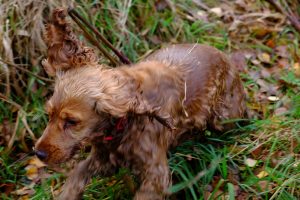 tremendous splurge as spaniel meets think mud on a gorgeous crisp quiet autumn day we can hear exactly what the two spaniel shaped wriggles of mischief are up to. 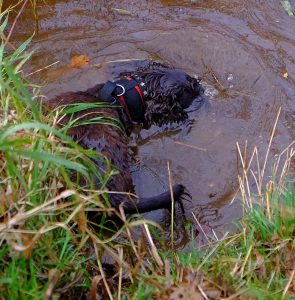 We now have not one but two water obsessed spaniels. Whilst he still hasn’t mastered the fine art of swimming or indeed following the laws of physics surrounding buoyancy he now leaps into the blue wet stuff with gay abandon happily blowing bubbles all the time. 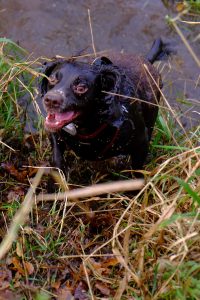 Thankfully the giant mosquitos which plagued us earlier in the year – despite rigorous application of tropical strength DEET based insect repellent – have retreated to whichever circle of hell they emerged from. 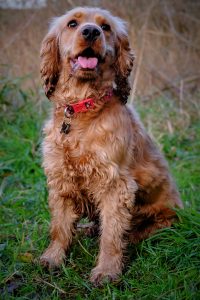 Speaking of the wild inhabitants we encounter on our travels, despite having a wriggle of spaniels with us we’ve had some wonderful encounters on a our travels and throughout next year we will be sharing these as well as the continued adventures of our canine besties. Some of our highlights have included kingfishers, our first ever Hobby, green wood peckers, meadow pipits, buzzards, roe deer and herons.

When it comes to herons Chewy has also had his own somewhat confusing encounter. After stumbling upon a 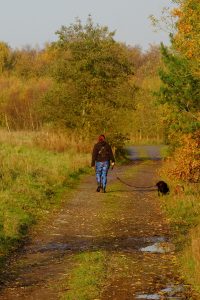 large pond in a wood obviously his first instinct was to wade in a perform his best impression of a furry lead weight. However he had failed to notice that a number of canada geese and a large heron were already resident. Surprisingly the heron was initially unperturbed, something which amazed his dad who has spent many long hours in hides watching these wonderful birds. That was until the line of bubbles and waving soggy tail started to weave their erratic way out towards the middle of the pond. The heron was clearly as befuddled as Chewy and rather than taking flight, it proceeded to attempt to drive the geese away. The resulting kerfuffle could probably heard several hundred metres away and Chew’s soggy and alarmed head appeared just as it reached a crescendo. A panicked spaniel submerged and made for shore, mum and dad as 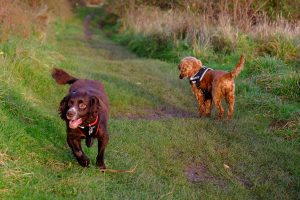 A similar story of ornithological nonchalance occurred on the banks of the Manchester Ship Canal as we strolled towards Wigg island. It only took his dad almost a decade exploring the wilds of Cornwall and then Cheshire before he got his first decent photographs of a kingfisher. These were the results of patience, learning all about his local “patch” and fieldcraft 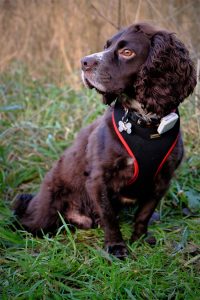 with a telephoto lens.

Chewy had stopped on the bank next to an old ruined wooden pontoon and sat looking at the canal with his tail wagging. Less than a metre away a female kingfisher sat regarding what she seemed to regard as a harmless but less intelligent form of life.

Needless to say the memory of those few minutes, sat with him and his sister will stay with us forever. What a privilege this – and indeed all such encounters are.

Do we know anyone (UK) who knows hounds and needs a lorge rescue pupper in their life? Vimes's pack-brother Red (bloodhound cross) needs a home with space to help him unpack kennel-life trauma and be their partner in crime/ learn to be a household doggo. (DM us for deets/chats) 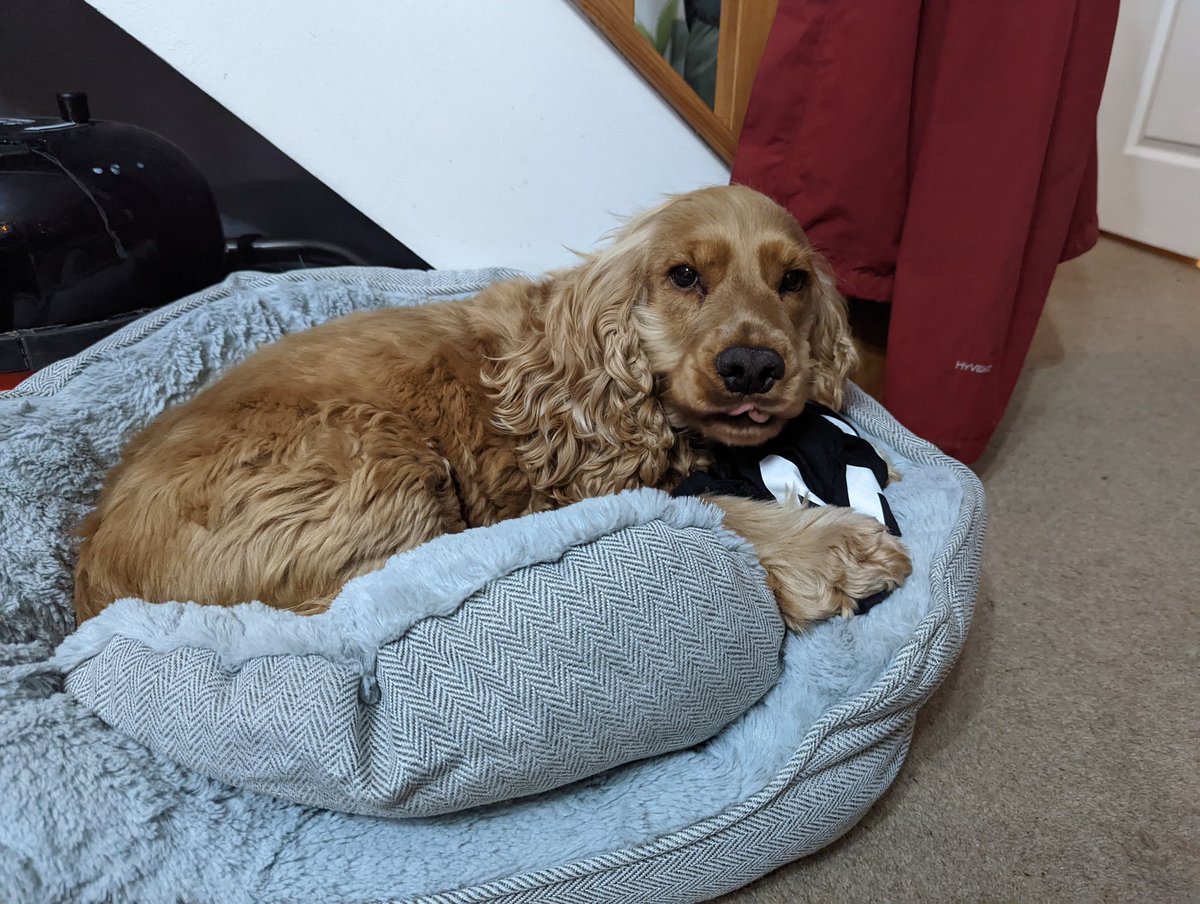