Posted: October 02, 2020 Under: A Little White Blog By Mark No Comments 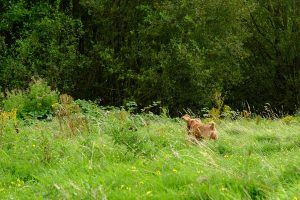 For any dog mum and dad watching your beloved doggos bums disappear into the distance as you vainly try to get them to come back to you is as much a part of living with them as anything else. Being able to let your furry friends off the lead to run, sniff, woof, roll (ahem) and just generally dog is a joy. For their safety, as well as potentially others and your sanity you need to be sure that they will always come back to you. 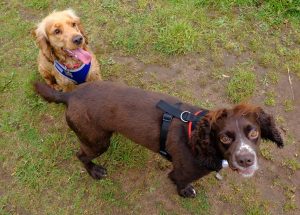 The first thing to say is whilst we always emphasise positive reinforcement with any form of training, we simply can’t repeat this enough for 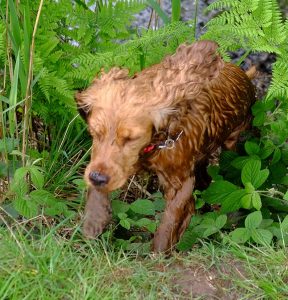 recall. It doesn’t matter if you’ve spent twenty minutes whistling and calling whilst trudging through waist high nettles. Or if your little doggo princess comes back covered in something unspeakable, you need as far as they are concerned to be overjoyed to see them. Fuss, cuddles and treats. Every time they come back to you. Even, as has happened, she has rolled in dead basking shark. Very dead shark. In high summer. On Perranporth beach. With a long drive through tourist traffic home. Moving on…. 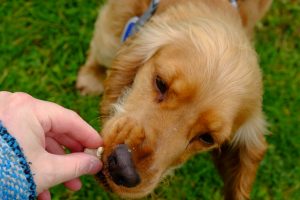 The next thing is to understand that doggos (especially spaniels) have what us hoomans call “selective hearing”. Simply put this means that occasionally they will be in the middle of doing something that is so overwhelmingly awesome that their hearing will cease to function unless there’s something even better with which you can get their attention. Even if this takes some time to get them to come back to you then again, snuggles, fuss and ideally a treat should await. Always make sure that coming back to you is far more of a reward than rolling in fox poo or chasing that non-existent squirrel up a tree.

Positivism, consistency (ideally don’t use more than one command for recall plus keep it for recall only) and most importantly patience are key. Every pup is different and what works for one might not work for others. We’ve found that clicker training works great for other dogs in the past as it lets you start rewarding the dog with praise (the “clicks”) the moment they start to exhibit the behaviour you want. With Willow and Chewy this has proved a complete failure – instead its all about tone. Clicks are ignored. They respond to a stern “here” followed by praise as soon as they start to come. The loudness of the call helps Chewy in particular as jokes about his “selective hearing” aside suffers from occasional ear problems and we’re sure is slightly deaf.

We’ve also combined this with crouching down – mum and dad always crouch down to give treats so this is a great visual cue in more open countryside. This has the bonus that it makes it a lot easier to take photos of them in full flight coming back for a treat and cuddles. 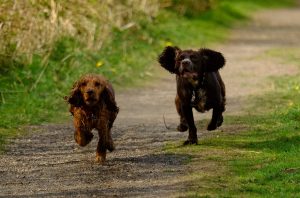 Chewy in particular has needed a lot of patience. For him the big wide world is completely overwhelming . Everything is brand new and he has had to learn so much in a short time. And even after nearly eight months he’s still learning!

We found using an enclosed dog proof field (you can hire these if you can’t find a publicly accessible one) was a great help in giving him the confidence without being overwhelmed. It also meant we weren’t worried about any resulting “sit-chew-ations”.

He has the unerring ability to get himself into what we call sit-chew-ations. Being a little confused by existence he is brilliant at getting over excited and slightly lost. His best known trick is to get distracted so that he is out of earshot and then to panic as he can’t find us. Thankfully, Willow understands that “where’s your bro'” means she needs to head off, find him and bring him back.

As time has gone on he’s learnt to follow his own scent trail back and developed a vague sense of direction. After one particular incident which involved nearly an hour of Willow and dad running in circles around Chewy and vice versa, we invested in a dog tracker. It showed that poor Chewy was always vaguely in the same area just having problems finding us. He was always so pleased when he proudly “rescued” his family (or was it the other way round). Thankfully for all of us the world is gradually becoming a lot less confusing place.

That said, as recently as last week he managed to get himself into yet another sit-chew-ation. He followed his sister through a break in the hedge to go for a quick bog snorkel and bramble bash. The problem occurred when it came to getting back to dad. 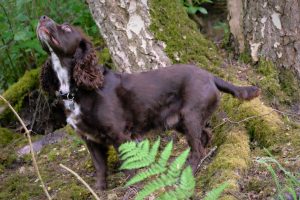 Willow emerged through a second run in the undergrowth only for Chewy to appear next to his dad …. but blocked by vegetation that was impassable even for a spaniel. After a quarter of an hour of both Willow and dad attempting to coaxing an increasingly squeaky and concerned Chewy through to either of the ways through, his dad was forced to initiate a rescue.

We don’t wish to upset readers of a sensitive disposition so we’ll just say that his dad fortunately is up to date with his tetanus and his mum is a dad hand at patching up bramble, barbed wire and rusted metal wounds!

Non the worse for his adventure, Chewy was happy to be reunited with his family and proceeded to spaniel and enjoy the rest of his walk.

We’re certainly not experts as is no doubt becoming clear to those of you following our exploits. We’re always learning but our animals are our family and we hope that by sharing the joy and our stories we’ve helped you either feel the same – or to consider taking on a rescue of your own. Make every minute special, even if it does involve mud, bleeding, waving of hands and running in circles. Dogs really do gave back in spades what you give to them.

As always we love to hear from you and are looking forward to sharing plenty more over the next few weeks and months.