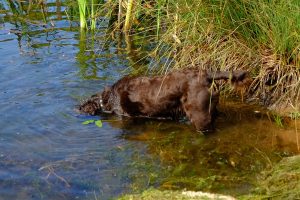 In the first part of our series we took a look at housetraining, so for the next, we’d like to talk about one of the joys of rescuing – that is seeing your new friend(s) grow in confidence as they experience new sensations and situations. There’s some general advice around introducing any dog to anything new – particularly for one from a difficult background but we’ll cover that in a later post. Today we want to share with the sheer joy that has been Chewy’s introduction to water, although as you can see he’s not *quite* got the hang of it just yet!

We’re pretty sure that he’d never seen anything 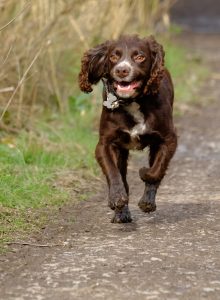 deeper than a puddle judging from his reaction to streams, ponds and lakes. This ranged from quiet bemusement to a semi panicked state of befuddlement. He wan’t really sure initially if he could even drink from these strange big or moving blue wet things. After a bit of gentle coaching he gradually realised they were slurpable but in a very unlike spaniel way would still insist on walking over even the smallest stream. Given that for the first few weeks fields, woods and non room sized spaces caused some consternation this wasn’t too much of a surprise but he was helped by being able to follow and learn from his older sister. Sadly tide and time wait for no doggo and she’s been forced to retire to her bed as thanks due to arthritis her days of running – but not scoffing treats and cuddles are in the past. Still she had given him the confidence to deal with this strange but amazing new world in which he found himself.

Chewy continued to go from strength to strength as his fitness came back. He filled out, learnt about the joy of weeing on molehills (to his day we fear that to the diminutive Talpa europaea his approach is synonymous with that of a god of foul smelling rain) and running around in random directions.  He was happy. For a few weeks we were only able to walk him on his own and whilst he bonded so well with us he lacked a canine companion to teach him the art of dog. As a result, the concept of doing anything other with water than drinking out of or sploshing through the shallowest and stillest of puddles was still anathema to him. 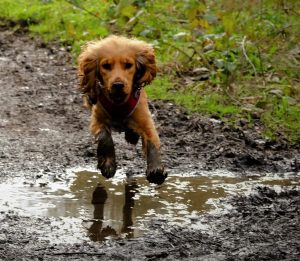 So in early March when we crumpled and welcomed a small golden ball of energy otherwise known as Willow into our lives I had hopes that she might help him with his sense of aquatic perplextion. Despite her being a rescue too, her background meant that she was already a pretty confident little girl despite the upheaval of being kennelled and losing her routine.

On her first proper off-the-lead outing she went from prim and proper princess to mud splattered bog snorkeler in a matter of seconds leading to her first bath with us. The result of the initial rinsing was a large volume of what looked like a rather fine, thick gravy. Much warm water and plenty of 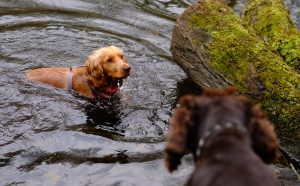 doggo shampoo later she had pretty much reverted to her initial colour, smell and texture. On her next outing we passed the old Latchford canal – now in the care of the Wildlife Trusts and a wonderful overgrown haven beloved of ducks, kingfishers, geese and midges of unusual size. Into which Willow dove nose first and proceeded to happily swim in circles. 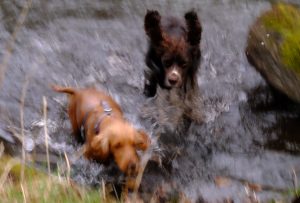 Chewy had a lightbulb moment – something which, bless him, is something of a rare occurrence – and to our amazement jumped in after his little sister. Not being sure whether he should sit there and float or sink – sadly he doesn’t seem to possess the canine innate ability to swim – Willow took him in paw and the two of them proceeded to go ballistic. Despite still not having learnt to swim he absolutely loves water with his little sister having given him the confidence to try and enjoy it. Chewy’s favourite method is to wade out until he is 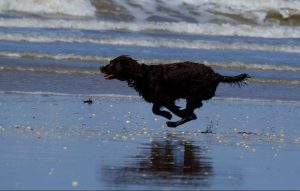 up to his chest and then proceed to stick his head under water in order to blow bubbles.

Since then he’s taken to water like, erm, a duck (that can’t swim) to water. The lesson from this is that life for Chewy and Willow seems to be much more fun with a canine companion.  Willow has taught him so much since she became part of the family and its a joy to see how much he copies her mannerisms. His first actual trip into the sea was spurred on by Willow jumping into the surf like a pro. He immediately hared off in the direction of North Wales leaving a trail of spray and befuddled seagulls behind him.

We have no doubt that in Chewy’s case his little sister has been instrumental in letting him grow into the confident happy dog that he is now. And of course we’re incredibly grateful to CAESSR without whom we wouldn’t have these two wonderful spaniels with all their soggy exuberant joy in our world.