Posted: September 02, 2020 Under: A Little White Blog By Mark No Comments 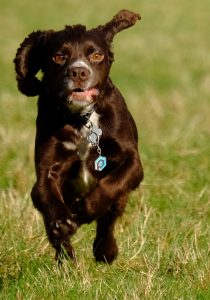 Probably the most common question we get asked about rehoming a rescue dog is “how difficult is it to house train them?” It’s a fair question, but before we attempt to answer it may we suggest you ask yourself another couple of questions first? As patronising as this sounds you only need to look at any of the dog rescue organisations to see reports of puppas being taken back for being sick, pooing or weeing on their first night in a new house or woofing the house down. After one night. Also bear in mind these are rescue dogs which by the nature of their background are bound to have some degree of anxiety. As a result they will show symptoms of distress which will include having accidents, barking or whining and needing to settle into a routine.

We’ll talk more about these later, but in the mean time there’s two questions that anyone wanting to give a home to a dog (this applies to a puppy a much as a rescue) need to ask. If there’s any doubt as to the answer to either of these being a resounding “yes” then a dog probably isn’t for you. And this is before we even get into everything else that goes into having these amazing creatures in your family!

The good news is that in the worst case a rescue dog is as much work as a difficult puppy. The best case is that a rescue dog is much less – in fact almost effortless sometimes – compared to a puppy.

We’ll stick for this post strictly to house training 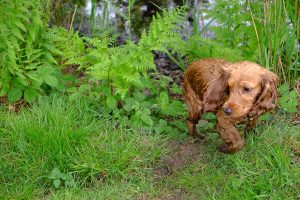 and for that we’re going to talk about Chewy (top left), Willow (to the right) and the greatly missed Ellie (below).

If you’re a regular follower of ours you’ll know the history of Chewy and Willow but just in case here’s a brief precis:

Chewy when we adopted him was a nervous, thin, non house trained boy with a heart problem (which CAESSR had funded the operation to fix) and no recall.

Willow was an 18 month old cocker, house trained with good recall having been given up by her previous owners as they were unable to cope with the extra dog. We’re very grateful for this – not only have we ended up with a gorgeous little monster – they did the right thing rather than just abandoning the dog or having her put down. 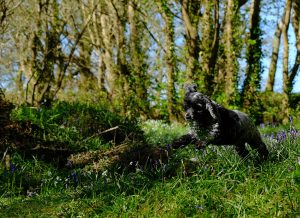 Ellie was a blue roan cocker which we had from a puppy, equal parts love, mischief and selective hearing. Whilst we wouldn’t change her for the world she was in retrospect, probably the most difficult puppa I’ve had to housetrain. She was worth every minute though and was my best (doggo and hooman) friend for 13 years.

It probably took us 6 months from Chewy arriving to him finally being house trained – to the extent where we can take him with us when we do home checks for CAESSR where he invariably behaves impeccably. With Chewy we initially tried both puppy pads and also crating. Crating normally helps as dogs will invariably not toilet where they sleep. Its important that the crate is seen as their own personal space with plenty of toys and blankets. Chewy had two – one in the living the room and one in our bedroom as he suffered from severe separation anxiety.

When he first arrived bear in mind he had never seen stairs and didn’t know how to use them – so one of us would sleep on the sofa. Hence the extra soft crate for the bedroom. He now sleeps there despite being allowed up on our bed!

We also fed him in the crate as generally dogs won’t toilet where they sleep or eat. Not our Chewy though! It was using this method that I finally managed to get Ellie (mostly) house trained after around 4 months. And even then she was prone to peeing inside for the rest of her days. 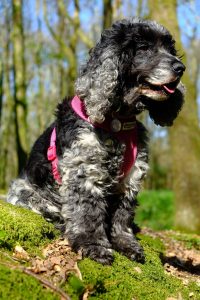 treat when he went where he should and ignoring him (which is the worst thing in the world for a dog) when he didn’t. Treats, cleaning and patience meant that he worked it out and now even asks to go out for a wee. Number 2’s were sorted pretty quickly – it was just his tendency to wee as and when he needed to that took the time.

With Willow for the first few weeks we also experienced accidents which is entirely normal for any rescue dog. Like many of us they need a routine and after kennelling especially (which is a very stressful experience) they will experience high levels of anxiety. Now she has settled and in a proper routine she continues to polish her halo.

Getting your pooches into a routine also helps – so our little family know that after breakfast is straight out, after lunch is swimming and walkies time. There is no wrong or right – every dog is different – the main ingredients are love and patience. Positive reinforcement only with high value treats and working out what will work for you and your pup are the order of the day. Crating and puppy pads may help you, they may not.

As I hope you can see from the short anecdotes we’ve shared above Chewy with his background of neglect wasn’t actually all that much harder work than Ellie from a pup (and certainly wasn’t when you take into Ellie’s chewing!) while Willow was probably the quickest dog ever to settle in.

There’s three common misconceptions about house training dogs that we can say hands on heart don’t work and under no circumstances should you use them:

Remember that the first night and week will be the hardest not just for you but for your new arrival who will need all the love and patience you can provide. Put yourself in their paws and think about what they have been through. The rewards will always massively outweigh what you put in. 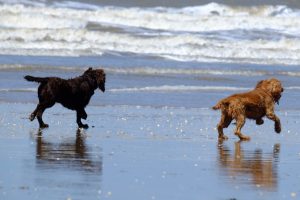 It is only right you stand down from @DHSCgovuk to prevent bringing it into disrepute.